After reading a number of reviews we settled on the Ashnil Mara Camp ensconced in the middle of the beautiful Mara reserve which spans 1600 sq km. The Mara is home to a plethora of flora and fauna as well as the big 5! The crossing over or the migration of the wildebeest as it is commonly known from Serengeti in Tanzania to the Mara is something everyone looks forward to… I shall continue with the post before this starts to sound like a geography lesson!

The opening of the the electronic gates beckoned us onto the premises of the Ashnil Mara Camp. T’was past lunch time and we were famished, thus agreeing to hit the restaurant before checking in. Good thing we did that as our rooms were a 10 minute walk away from the reception and restaurant area!

Here is where the comparisons started! Receptionist was great and check in was a breeze. However I have no idea why people working in the restaurant failed to have a smile on their faces- Maybe they were hit by a truck! On the other hand the chefs were friendly! After a decent lunch (We cant compare this to Sarova in Nakuru) and the ever accompanying Tusker we headed to our rooms to freshen up! Well appointed beautiful tents overlooking the Mara river.. It was bright daylight and nothing seemed out of the ordinary! Little did we know that come night- we would be hearing hippos grunt and nocturnal animals going about their business too.

On freshening up we left for the afternoon game drive and voted to go to the river to view the hippos and crocodiles! Not only did we see pods of hippos in the river but crocodiles at close distance too. On our left giraffes walked about without a care.. 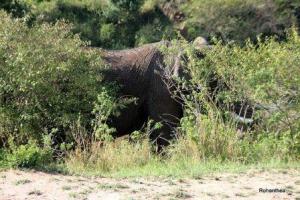 An elephant tried climbing out of the brush.. I fail to understand how he managed to do that given the steep incline! 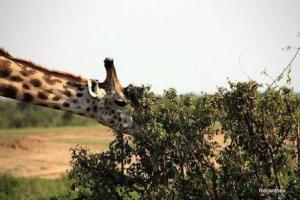 We finally drove to a viewpoint where tourists were allowed to get off! Looking down all we saw were cigarette butts which made our people give into temptation too! The view was breathtaking- No pictures can describe how we felt. Miles and miles of the Savannah around us with wildebeest dotting the landscape!

A few clicks here and a few clicks there and dusk settled in.. We were off  on our way to the Camp! On reaching we met others who sighted a leopard – that was definitely on the cards for us the following morning, given the distance we would have to cover and the time in hand! We tried asking around for a night safari but it was apparently strictly banned…….But hello this is Kenya!!!!

However, since we were too tired to do anything but have dinner and go to bed, we decided to let the matter rest for the night! Tomorrow would be a new day- a new beginning!!

Follow Pearls Of Blissdom by AntheasChronicles on WordPress.com
Join 2,036 other followers